Nek Chand‘s Rock Garden was one of the first places I went to see when I moved to Chandigarh in 1981. There were few places to see in Chandigarh — the Rose Garden and the Sukhna Lake being the other two major attractions. What made the Rock Garden stand out was the inventiveness with which everyday waste had been recycled into beautiful creations.

The middle classes at that time had not yet tasted the explosion in wealth that came in the 1990s, and as children our hobbies bore the imprint of the economic necessities that marked our lives. During summer vacations, I would try to make papier mache crafts from old newspaper and jell bits of leftover soap into a soap bar. The melted wax of the candles during Diwali would be patiently collected the next morning and melted again with a wick to create home-made candles.

Perhaps it was this economic frugality in the everyday life that subconsciously attracted us to the Rock Garden and left a deeper impression than most other landmarks in Chandigarh.

Unlike Le Corbusier, whose name we struggled to pronounce and spell, Nek Chand was a common man’s name. “Nek” means “a good natured” person and we imagined a person whose heart was full of kindness. The sculptures seemed to bear that out, too. We were awed by the presence of a local hero, a living legend. There were stories about how he moved around in the city on a bicycle. Kids claimed to have seen him in the garden, and I would not have believed them had I also not spotted him there myself.

Stories about his simplicity abounded and sometimes made headlines.

Sometime in the early 1980s, he was honoured by the Haryana Chief Minister Bhajan Lal and presented with a brand new Ambassador car. The next day, The Tribune ran a headline carrying the story. Accompanying it was a picture of the new car… with Nek Chand riding by on his bicycle. Perhaps he did not have the money for the fuel, or more likely did not know how to drive a car.

Nek Chand had a special relationship with his bicycle, which was displayed in the Rock Garden, though I haven’t seen it myself. Nek Chand credited his fame to this bicycle since it was a loyal partner on his otherwise lonely journey to build the rock garden. He commented thus on the bicycle on which he hauled the waste material to the site which later became the Rock Garden.

I used to work alone in the jungle and my bicycle was the only means for me to get out safely. My family was very harried by this bicycle. My wife was upset with it because she did not like me running around. So much so, that she refused to even sit on it, but for me, it was my true friend on an otherwise lonely journey.

Nek Chand embodied the real, living India unlike the artificiality of the European façade of Chandigarh where the poor have no space to live. This is unlike other towns and cities where the poor have spaces close to, if not next to, the rich. The post- British rulers of India yearned for a neat and clean city yet despised the poor who would maintain it so. There is a clear class character in the very structure of the city with the north-to-south gradient which serves as an economic gradient as well. 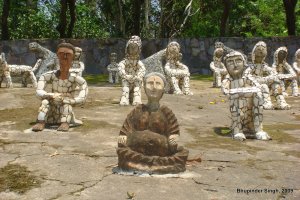 Nek Chand’s rock garden provided a way for the rubble and waste to reclaim a corner of the city. The fact he was allowed to legalize this space and even convert it into a famous landmark was both a concession as well as an assertion — that, while the rubble could come to the city, it could do so only as an aesthetic memento. As for the poor and those who maintain the cleanliness of the city, they still have no space, pushed as they are into quaintly-named villages like Daddu and Mani Majra.

Update: Times of India (Chandigarh edition) carries a follow up story regarding Nek Chand’s biycle, written by Sarika Sharma. The story makes a reference to this blog post. Here is the story:

CHANDIGARH: Nek Chand is gone. Left behind is his longtime companion, whom he often credited as his equal partner behind Rock Garden’s creation. It took him into the deep jungle where he worked. He ferried stones on it, went around town scouting for waste material. He called it his companion on otherwise lonely journeys to the making of Rock Garden. That was Nek Chand’s bicycle.

When the bicycle was put on display some years ago, Nek Chand had shared, while interacting with media, how he would travel various kilometres on his bicycle collecting material for Rock Garden. He said his family was a lot harassed with the bicycle. “My wife didn’t like the running around that I did on it. She hated it and never sat on it,” he had said, bemusedly. But for Nek Chand, the bicycle was special. “It has been my true friend, stayed with me through what were mostly lonely journeys,” he had said.

Canada-based translator Bhupinder Singh shares on his blog many a stories that he grew up on about Nek Chand and his bicycle. “Sometime in the early 1980s, he was honoured by then Haryana chief minister Bhajan Lal and presented with a brand new Ambassador car. The next day, an English daily ran a headline carrying the story. Accompanying it was a picture of the new car with Nek Chand riding by on his bicycle. Perhaps he did not have the money for the fuel, or more likely did not know how to drive a car,” writes Singh.

The bicycle now lies in a store at Rock Garden, dust-laden. The tyres are flat, the chain hangs loose. An SDO on duty at the site says Nek Chand would come to work on this bicycle for many decades, but was totally worn out by the end. “Last year, a leading cycle brand gifted him one,” he says, but is not sure if he rode it. However, he knows that this old bicycle will always be special for people who saw Nek Chand ride in to Rock Garden on it, in rain, sun and fog.